In honour of Black History Month we will be recognising notable contributions to the STEMs from people of African origin. Today we recognise Dr. Alexander Animalu. 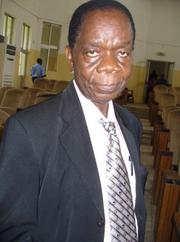 Born in Nigeria (1938), Dr. Alexander Animalu is a .theoretical physicist best known for his work on superconductivity and solar energy pioneering role. He completed his primary and secondary education in Nigeria as well his BSc in Maths from the University of Nigeria. His excellence at this stage won him  the Crowe’s Prize on Abstract Algebra and Theory of Numbers and the University College Postgraduate Scholarship which funded his MA and PhD education in Theoretical Solid state Physics at Cambridge University (UK). His thesis formed part of a key physics publication which as been referenced by over 700 other publications in international journals of high repute, the only African Physicist to hold such a record.

Following his education, Dr. Animalu has worked at Stanford University, Massachusetts Institute of Technology (MIT) and was Assistant Professor of Physics at University of Missouri. He later returned to Nigeria where he rose through the ranks at the University of Nigeria as Professor of Physics, Head of the Physics Department and then eventually becoming Dean. His research career has led to over 28 books and 80 publications with his principal book, Intermediate Quantum Theory of Crystalline Solids having been translated into multiple languages including Russian.

Dr. Alexander Animalu received the Nigerian National Order of Merit award for Basic Science in 2000  and his other achievements include; Founding member and former President of the Nigerian Academy of Science, member of the Honorary Presidential Advisory Council on Science and Technology , founding editor of the Nigerian Journal of Solar Energy and the only African to sit on the Advisory Board of the Euro-Journal of Physics. In addition to his research accomplishments, he spearheaded the establishment of a Centre for Energy Research and Development in the University of Nigeria and established two youth organisation to promote scientific research in Nigeria.

Dr. Alexander Animalu is currently the Chairman/CEO, Institute for Basic Research and is Professor Emeritus at University of Nigeria. He continues to apply his skills by using geometric thought processes to investigate African multilingualism and Igbo artefacts.

Sign up for our free monthly newsletter and stay informed